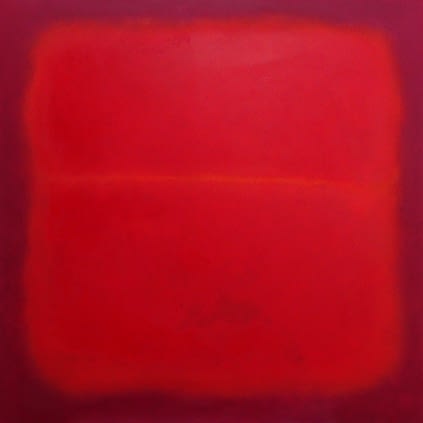 …became some sort of label but dispite that there are still artists who refer in their contemporary art work to this. So I´m one of these and will work on because there´s no alternative when searching for deeper meaning of colour. It seems all stories have been told in painting but when you´re not in telling stories while painting but more in “meditating” over what comes through you and what will last it´s obvious that there can´t be anything else but Color Field Painting. Color is the subject of my work with large painted expanses surrounding the viewer.  Is this style meditative and does it come from the subconsciousness? Not really because while painting a much deeper awareness takes part of my mind and soul and becomes an essential part of the process and at least part of the created art… So I will call it from now on “Color Awareness Painting“

“As its name indicates, Color Field painting has three components—“color” and “field” and “painting”. In former times a main meaning included that the aim of rejecting illusions of depth and gestural brushwork. So that no “countryside” would emerge in ones mind.  Color Field painters applied color that would often span the entire ground. As they intended the elimination of illusion of something that could remind us on something real, many Color Field Artists treated the ground as a single plane. Robert Atkins would say: “This emphasis on the flatness of the painting mirrored the formalist imperative that painting respect its two-dimensional nature rather than create an illusion of three-dimensionality.” And so they span a complete new meaning an what painting could be – no more illusion (landscape, room…) but more just itself.”
source: moca.org

“The color field painting (also: Color Field painting and post- painterly abstraction ) is a form of expression of contemporary art which is characterized by large, homogeneously filled color fields . This art movement in the mid- 1950s developed in America from the Abstract Expressionism. Mark Rothko, Barnett Newman ( Who’s afraid of red , yellow and blue ) and Clyfford Still are important precursors and partly pioneers of this style .

The works are mostly large format . Often the paint is applied without the use of classical art supplies directly to the (horizontal lying on the ground ) unprimed canvas ( emptied , poured , sprayed ) , penetrating directly into the tissue ( Soak – Stain – technology) – quite similar to the coloring of a substance .

“Various other names for Color Field painting were coined during the 1950s and 60s. The most notable was Post-Painterly Abstraction, the title of an influential 1964 exhibition at the Los Angeles County Museum curated by the critic Clement Greenberg. It encompassed what is now called Hard Edge painting.

Just as Frankenthaler’s technique was inspired by Jackson Pollock’s poured paintings, so, too, was Color Field Painting an extension of Abstract Expressionism. Pollock, with his all-over compositions, was the first Color Field painter. The inspiration for the dramatic use of color in Color Field painting came from the work of the Abstract Expressionists Mark Rothko and Barnett Newman. Since Color Field painting is invariably abstract, nature-based color has typically been abandoned in favor of more expressive hues. When examined at close range, the expansive canvases of the Color Field painters frequently seem to envelop the viewer in a luxuriant environment of color. A French variant of Color Field painting was known as Supports/Surfaces. The group comprised the artists André-Pierre Arnal, Vincent Bioulés, Louis Cane, Marc Devade, Daniel Dezeuze, NoËl Dolla, Toni Grand, Bernard Pagés, Jean-Pierre Pincemin, Patrick Saytour, André Valensi, and Claude Viallat. Between 1966 and 1974, they frequently showed together, issued manifestos, and published a magazine.”

My art in color field painting has revolved in the 90s and emerged until today – sometimes inspired by Mark Rothko (Marcus Rothkowitz; 09.25.1903 – 25.02.1970). This type of painting emerged from the abstract impressionism of Jackson Pollock, Jasper Johns or Helen Frankenthaler was brought to the championship by Mark Rothko in the course of his work. It stands beside Barnett Newman and Ad Reinhardt in a modern tradition not only in the color / surface treatment as well as in the extended reflection and intellectual penetration.

Also include the years of work by a Josef Albers (homage to the square) in this category, if a category is necessary at all. Since such an assignment is always committed after the fact through art history, which tends to give the works a certain rigor.

Nowadays color field painting doesn´t affect the “art-circles” – we find so many “not abstract” art that someone might think there wasn´t a art revolution in the early days of the 20th century. That´s not a german tendency as one can see on current art exhibitons all around the globe…

Turquoise – A world between blue and green

freedom is what I mean
2 replies

This site uses cookies. By continuing to browse the site, you are agreeing to our use of cookies.

We may request cookies to be set on your device. We use cookies to let us know when you visit our websites, how you interact with us, to enrich your user experience, and to customize your relationship with our website.

Click on the different category headings to find out more. You can also change some of your preferences. Note that blocking some types of cookies may impact your experience on our websites and the services we are able to offer.

These cookies are strictly necessary to provide you with services available through our website and to use some of its features.

Because these cookies are strictly necessary to deliver the website, refuseing them will have impact how our site functions. You always can block or delete cookies by changing your browser settings and force blocking all cookies on this website. But this will always prompt you to accept/refuse cookies when revisiting our site.

We fully respect if you want to refuse cookies but to avoid asking you again and again kindly allow us to store a cookie for that. You are free to opt out any time or opt in for other cookies to get a better experience. If you refuse cookies we will remove all set cookies in our domain.

We provide you with a list of stored cookies on your computer in our domain so you can check what we stored. Due to security reasons we are not able to show or modify cookies from other domains. You can check these in your browser security settings.

These cookies collect information that is used either in aggregate form to help us understand how our website is being used or how effective our marketing campaigns are, or to help us customize our website and application for you in order to enhance your experience.

If you do not want that we track your visit to our site you can disable tracking in your browser here:

We also use different external services like Google Webfonts, Google Maps, and external Video providers. Since these providers may collect personal data like your IP address we allow you to block them here. Please be aware that this might heavily reduce the functionality and appearance of our site. Changes will take effect once you reload the page.

The following cookies are also needed - You can choose if you want to allow them: